Start a Wiki
NGY48 Group Wikia
NGY48 is an online vocal cover group dedicated to the AKB48 Group and the Sakamichi Series. The group was created in 2016 and officially debuted in 2018 with the release of Sekai wa Doko Made Aozora na no ka?. New members are added once a year through auditions. 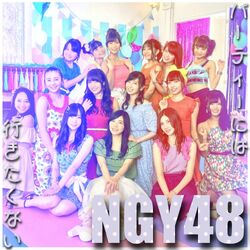 Links
Retrieved from "https://tasainaproject.fandom.com/wiki/NGY48_Group_Wikia?oldid=2960"
Community content is available under CC-BY-SA unless otherwise noted.